This week Jamie takes a look at the Vancouver Real Estate Statistics for August 2019 and things appear to be leveling off.

The statistics for the month of August are in and the Greater Vancouver Real Estate Board reports a list to sell ratio of 17% for August.

What this means is that we are in balanced market conditions. It means we have an equal amount of buyers and sellers in the market place. If the market continues like this for a prolonged period of time, what we will see is the market levelling off as opposed to the declining prices we have seen in the last 12 to 18 months.

The benchmark price for all properties in the Greater Vancouver Real Estate Board was $993,000 for August. That is down about 8% over the last year. Prices are still declining, but it is not as dramatic as it was. They went down a little bit over the last couple of months, but as I said previously, if the balanced conditions continue, we will likely see a levelling off in prices.

There were 2231 sales in August. That is up 16% from the August 2018 numbers and it is still 9% below the 10-year average. Don’t forget that the 10-year average includes the period between 2013-2016, was astronomical period of increase,so that would skew that figure as well. Another interesting fact is that this is the 4th consecutive month that there were over 2,000 sales. The 6 months previous to that, from November 2018 to April 2019, we did not hit 2,000 sales once. March and April are typically the busiest months of the year, but this year, May to August has been our busiest months, which is really unusual.

All of these statistics do support the possibility that through the fall we may see things levelling off. I am sure by the beginning of next year some things will have happened to affect our markets in different ways. 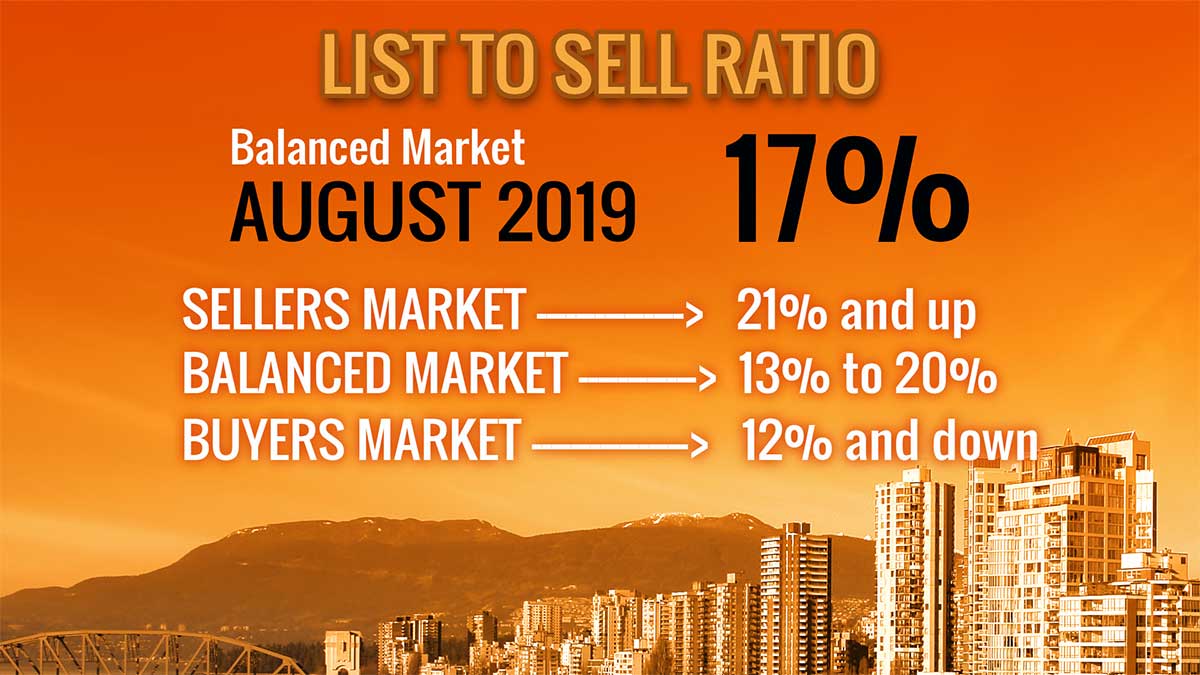 There are currently 44,000 new homes under construction, which is a pretty significant figure. These homes are not so much being built in Vancouver where we are down to around 5,000 new housing starts. What will happen if new construction doesn’t show an upturn is that the trades will see a slow down in the area over probably the next 6-12 months.

The last thing that I want to talk about is the same drama I have been banging around for the last few years around here. When you listen to the media, they talk about how slow the markets are. In general, yes the markets are slow and the numbers are reflective of that in the last few months. But again, what I will tell you is that the low sides of the market are really busy. It seems to be the higher sides that are slow, and every market has a cut-off point.

42% of all the Downtown condos below 1.25 million sold last month. That means if you are selling a property under 1.25 million in downtown Vancouver, you are in an extreme seller’s market. Nobody reports that and you do not see it anywhere.

When you get above 1.25 million, there are 331 properties for sale, and only 20 sold. That means that only 6% above 1.25 million sold, and that is an extreme buyers market. Same geographic area, but completely different markets in the 2 price ranges.

24% of detached houses under 3 million on the Westside sold. There are only 150 of them for sale, but 36 of them sold last month. The Westside, which is supposed to be the most expensive Real Estate in Canada, and it is an extreme buyers’ market under 3 million. When you get above 3 million, the market is non-existent at 5%.

These are some of the things that they do not talk about in the media, and for the life of me, I do not understand why.